A recent small decline in the price of copper led to hopes that there might also be a downward trend in copper theft in South Africa, but a major Chilean earthquake has resulted in copper prices starting to rise again. Metal theft remains an attractive prospect for many unemployed young men in South Africa, and is a lucrative activity for international criminal gangs.

Serious Consequences For Industry and Commerce

Metallic theft has been identified as a major threat to the South African economy. Recent examples include the cable theft in October 2013 at O R Tambo Airport which grounded all flights. Power station metal theft is a continuing source of electricity supply problems, such as the theft attempt which caused an explosion at Tshwane in March 2014, blacking out much of the city of Soshanguve. 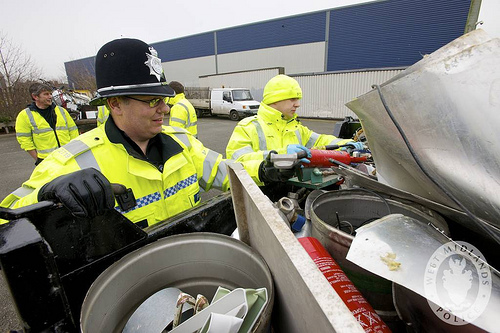 No single solution will eliminate the problem. However, metallic theft is being made harder, and detection rates improved. At the same time, technologies are being developed which will make electrical systems more robust.

The Second-Hand Goods Act came into full operation on April 30th 2012. The Act equates possession of stolen goods with theft, and regulates the scrap metal trade. It also criminalises the possession of non-ferrous metal cable from which the insulating cover has been burnt off; this is to counter the thieves’ usual practice of burning cables in order to disguise their origin.

The Copper heads, the specialist police unit formed in 2007 to fight non-ferrous metal theft in the Western Cape, is currently making up to 300 arrests every year, and there have been suggestions that a similar unit might be established in Johannesburg.

Eskom, the South African electricity generating company, has an in-house copper theft prevention unit and has established a task force with other interested parties. Eskom is actively engaged in seeking alternatives to copper, but has recognised that at present, more work needs to be done on the technical specifications necessary for its earthing systems, before copper replacements can be used in them.

One way of reducing the damage caused by the theft of earthing materials is to use a copper replacement. Aluminium, which has 60 per cent of the conductivity of copper, is sometimes used but it presents problems of corrosion, and is also itself sufficiently attractive to thieves to make its use unsafe. Copper clad steel is an option which has been used in America for many years, and is now gaining favour in SA. The two metals cannot be easily separated for resale, and the copper actually reduces the scrap value of the steel. At present, this would be an expensive solution, as there is no manufacturing facility for copper covered steel in South Africa, but in the long run technologies such as this one are bound to become more cost-effective.

If you would like to talk to GreyMatters about metal theft or our Earthing and Lightning services then please contact us today.

Or why not schedule a FREE 30 min call to discuss a potential project or if you have any queries, by using our “need advice” widget below …