Photovoltaics – With the two exceptions of nuclear power and tidal power, virtually all the electricity generated on earth comes from the sun, by using sun-driven natural phenomena such as wind and rainfall, or by way of the ability of plants to capture carbon from the atmosphere by photosynthesis. Electric power is generated renewably using these resources, or more often non-renewably, using the planet’s diminishing store of fossil fuels such as coal, gas and oil.  Photovoltaics are the most direct way of generating electricity by harnessing the sun’s power, and PV is considered to be one of the most promising technologies available in the world’s urgent search for ways to avoid a devastating energy crisis, and to mitigate the dangers of the greenhouse effect resulting from carbon dioxide emissions. 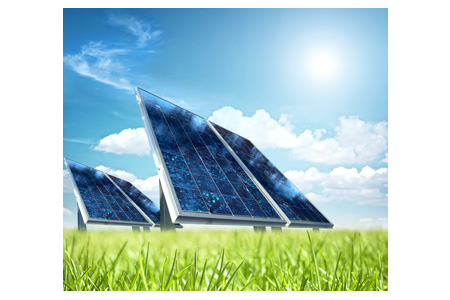 Photovoltaic cells consist of silicon, or more rarely another semi-conducting material, arranged in layers. Sunlight hitting the cell surface creates an electric field across the layers, and the resulting electric current can then be converted into conventional electric power.

Improving the Efficiency of Photovoltaics

Although the principle is simple, it is only in the past few decades that photovoltaic technology has developed to the point at which Photovoltaic cells have become efficient enough to be used widely for domestic and industrial applications. Technological improvement continues at a rapid rate, and modern PV cells (usually mounted into arrays known as solar panels) can operate even in cloudy weather. Their efficiency, which is the term used to describe the proportion of the sun’s energy that is converted into electricity, has improved from single-figure percentages until it now, in optimum conditions, can approach fifty per cent.

A solar electrical system involves no moving parts or hazardous substances, so is a safe, as well as environmentally friendly, method of generating power. However, as with all electrical devices, there are some hazards, and attention needs to be given in particular to earthing, surge protection, and lightning protection.

Although a solar panel produces electricity rather than consuming it, it needs to be thought of as an electrical appliance to which the same rules apply as to any other device. The circuitry which connects it has the same potential for damage and malfunction, and the panel therefore needs a reliable earthing system.

Photovoltaic arrays are necessarily sited in exposed positions such as rooftops, and lightning protection is consequently an important consideration. In the USA, lightning has been identified as the major cause of the failure of solar electric systems. The system should have its own earthing, independent of any installed in the building it serves.

Surge protection is important because a lightning strike in the vicinity of a solar array will create an induced current of very high voltage in inverters and controllers, which are more likely to be damaged than the solar panels themselves.

GreyMatters provide services for earthing design, simulations and field assessments along with risk assessment and design of lightning protection.

If you would like to talk to GreyMatters about our Earthing and Lightning services then please contact us today.

Or why not schedule a FREE 30 min call to discuss a potential Photovoltaics project or if you have any queries, by using our “need advice” widget below …

Understanding someone else’s Earthing Design can be challenging enough for most. Unsurprisingly, it can be a big ask for non-experts to understand how your design will work if the only means of communicating your strategy is with a written report.Learn how to improve your communication with a much more comprehensive range of clients using the […]

Want to learn what goes into an Earthing/Grounding design? Earthing/grounding design is a safety-critical component of the HV power system. It is often one of the most misunderstood topics or specialisms. In this series, “Earthing Design”, we take the lid off the design process from start to finish, to demystify and bust a few of […]